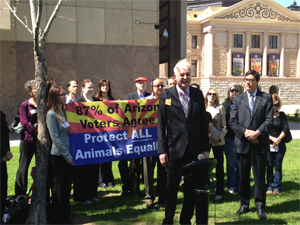 AHS, in partnership with animal protection organizations and law enforcement, continue to stand united in opposition of HB2587/SB1267.

Despite bipartisan opposition, HB2587 narrowly passed the Arizona House on March 10th by just three votes. The improved amendments to the bill that restore investigative authority to law enforcement in cases of cruelty to livestock or poultry and removes the problematic 5-day reporting requirement are a step in the right direction, but don’t go far enough.  And while we appreciate the efforts to include hoarding provisions, the language is deficient and unlikely to provide additional meaningful protections.  Simply put, we cannot accept a mediocre win for Arizona’s cats and dogs at the expense of Arizona’s horses and cows.  We cannot in good conscience ask our supporters to help us save the lives of thousands of homeless pets each year, while knowingly putting the lives of thousands of other animals at risk. Abuse is abuse. And we cannot accept any lesser penalties for any animal abuse.

The legislation, which is now scheduled to move to the Senate is filled with reduced penalties and legal ambiguity.  Yesterday a coalition representing 16 local animal-welfare organizations, 12 national animal welfare organizations delivered a letter urging the State’s Senators oppose HB2587/SB1287.

Proceeds From Petcasso Sculpture Collection to Benefit Our Pets In Need