The Arizona State Senate just took a great step forward for Arizona’s animals. SB 1001 passed overwhelmingly in the Senate and will soon be heard in the Arizona House of Representatives. Our sincere thanks to each of you who made calls in support of this legislation that will help prevent deaths in hot cars! Learn more about Animal Welfare Legislation.

We thank the Senate Judiciary Committee for a 7-0 victory in advancing Senate Bill 1001 today! We are proud to lead these efforts with our partners of the Humane Legislative Coalition for Animals and our friends representing animal welfare throughout the state.

In today’s State of the State Address, Gov. Doug Ducey joined Arizona’s leading animal-welfare organizations and pledged his support of SB 1001, a bill that aims to end hot-car deaths and allows Good Samaritans to take action without risk of civil liability if they rescue a child or a pet from a hot car.

“All it takes is a Good Samaritan to save a life, to be on the lookout, see movement, take action, and stop another death,” Governor Ducey said during today’s State of the State address. “The last thing we’d want is any Arizonan worried about breaking into that car to save a life. Send me a bill protecting the Good Samaritans who save the lives of children and pets — and I’ll sign it.” SB 1001 is sponsored by Senator John Kavanaugh, a longtime animal-welfare advocate who drafted the legislation with the support of the Humane Legislative Coalition of Arizona – a group that includes the Animal Defense League of Arizona, the Arizona Humane Society, Humane Society of Southern Arizona and Humane Voters of Arizona. The Humane Society of the United States and local advocates, like Don't Leave Me.org, are also in support of the legislation. “Every year, local police and our Emergency Animal Medical Technicians™ respond to dozens of calls of children and pets left in hot cars,” said Dr. Steven Hansen, CEO of the Arizona Humane Society. “This law allows us to be able to direct the caller to take action, immediately, without exposing the Good Samaritan to liability for breaking a window and potentially saving a life.” [caption id="attachment_37430" align="alignleft" width="300"] 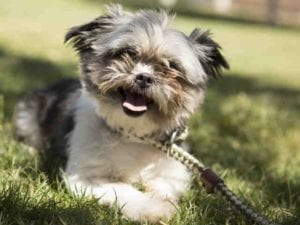 Calls about children and animals in distress begin long before Arizona’s infamous summer sets in. In fact, last April, a two-year-old Shih-Tzu was seized by Phoenix Police after being left in a hot car. Although it was only April, the day’s temperature had reached 97 degrees and when Aurra arrived at AHS’ Second Chance Animal Trauma Hospital™, she was dehydrated, dirty and panicked. Aurra was so shaken from her ordeal that it took weeks of one-on-one training with AHS’ behavior team to help her learn to trust again. Fortunately, she didn’t have any lasting physical effects from her ordeal and was adopted into a loving family who promises to never leave her in a car again.

AHS and its partners hope SB 1001 raises awareness of the dangers of leaving children and pets in the car, even during seemingly comfortable, double-digit weather.

Governor Ducey had been a vocal supporter of Arizona’s animal population and, in fact, used the very first veto of his administration to block legislation that would have weakened anti-cruelty laws.

Leo Is Looking For His Forever Family at Compassion With Fashion